The following chart shows Rileys coming to Australia in the peak postwar years. 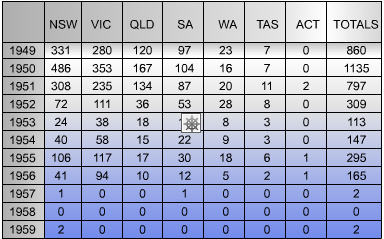 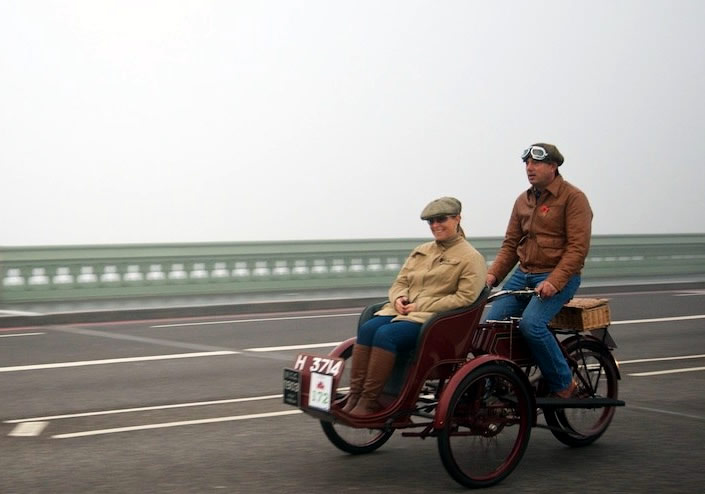 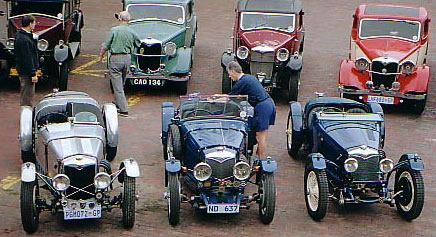 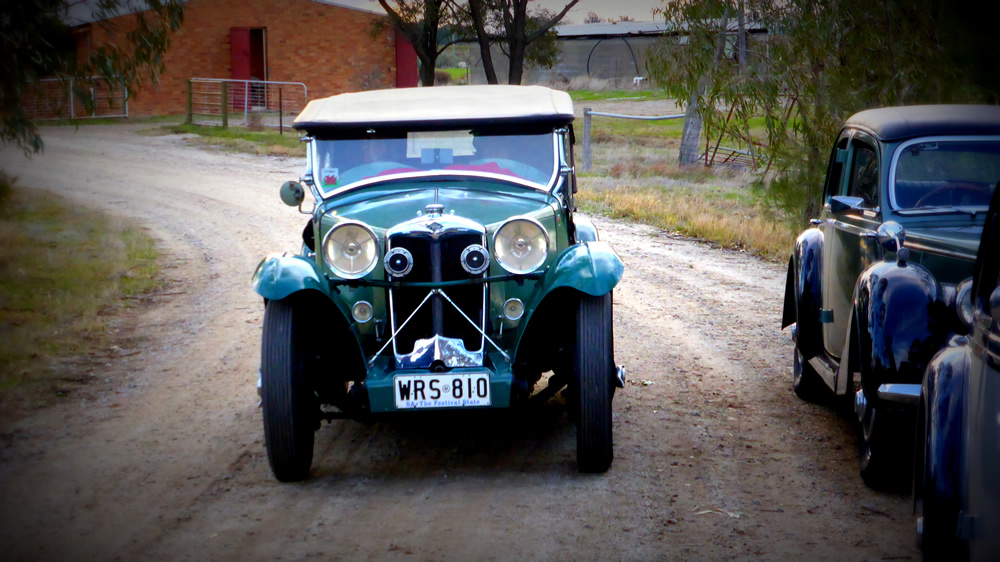 At the end of 1955 there were over 4,600 Rileys registered in Australia. This was just 0.3% of all cars registered. Australia at that time had 160,275 open cars (convertibles, tourers etc) and this was almost 12% of the total of 1.35 million cars on the road. By contrast, most Rileys were sedans (92%) although at the time there were also 11 Rileys registered as Utilities, 3 Station Wagons and a couple of Panel Vans!

Riley was a British car and bicycle manufacturer from 1890. Riley became part of the Nuffield Organisation in 1938 and was merged into British Leyland in 1968. ln July 1969 British Leyland announced the immediate end of Riley production, although 1969 was a difficult year for the UK auto industry and many Rileys may have been first registered in 1970.

Today, the Riley trademark is owned by BMW.

This is Australia’s first Riley Car Club.
Think about it. In 1955 Holden was only seven years old and our lives were very different from today. In 1955 – Work was proceeding on the Snowy Mountain scheme which had started in 1949. This work was to continue through to 1972.

In 1955 people were talking about the new play, “Summer of the Seventeenth Doll, directed by John Sumner and written by Ray Lawler. Dame Edna, the Moonee Ponds widow invented by Barry Humphries, also made her debut (although not in the same show)
People worried about this terrible new music, Rock’n’roll’, although they flocked to see the big acts from America at the Stadium at Rushcutters Bay.
People were also talking about the coming of television, which started on September 16, 1956. We were also anticipating the forthcoming Melbourne Olympics, although most Riley owners would not readily consider the two day trek down the Hume Highway in their cars. In those days the ‘Spirit of Progress’ was the way to travel interstate…

Imagine a world without shopping centres. The first to open in Australia was Chermside in Brisbane, and that was not until 1957. People flew overseas on propeller planes as the Qantas 707 jet was not to arrive until 1959.
The Riley marque was still in the dealerships, and in 1955 106 new Rileys were sold in NSW, 295 Australia wide. This was the best result since 1952 when Australia took 309, but was unfortunately the beginning of the end. After 1955 only 169 new RM series Rileys were imported. However, right through the 1960’s the Riley signs still stood proud at dealerships such as Lancaster Motors at Chatswood (Now a Toyota dealer)
Life in Australia
Most wives didn’t work. A man’s income was almost sufficient to support his family, a modest bungalow and an occasional night out at the pictures by tram, train or bus. A taxi ride from the city to Bondi cost less than 5/-. As for dinner out, there were few places to go. Hotels were not open on Sunday and neither were the cinemas. Sunday nights meant settling down around the wireless set to listen to the 8 p.m. radio-theatre productions.
In increasingly boom times, with full employment, and overtime sometimes so plentiful one could pick and choose for it between employers, the 1950’s was a period of burgeoning consumerism. This was particularly evident in the area of labour-saving household appliances.
Even in Melbourne and Sydney, let alone rural communities, around a quarter of all families still did without a refrigerator. More than half of all homes were yet to have hot water on tap, and while they may have had it available in the kitchen they were much less likely to in say the laundry or bathroom. Most clothes washing was still done by hand, with the water heated in a copper.
So the increasing availability of things like (electric) washing machines, refrigerators, and vacuum cleaners had a big and immediate impact on quality of life. They remained expensive however.
Raised on principles of thrift and savings and avoidance of debt, most folks worked extra and saved up for such things. But at the same time hire-purchase really took off. Hire-purchase created a means turning the potential of the future into the reality of the now. By 1955 30~40% of Australians had had something on hire-purchase at one time or another, including such other items as furniture or a car. The introduction of television itself probably was a significant contributor to the increase in hire-purchase usage – a purchasing method we take for granted today, but which at the time could only occur with a change in social values.

At the top end of the scale, carpets through the house, or a radiogram (though almost all households otherwise possessed a radio already), and certainly a television, were clearly luxury items.
Meanwhile, the “6-O’Clock Swill” had ended at the start of the previous year, following a narrowly won referendum in 1954. The pubs could now stay open until 10.00p.m., and beer consumption had now become a tad less frenzied if nothing else.
Lolita, the novel, was first published on September 15, 1955 and went on to great controversy; thankfully its author Vladimir Nabokov never drove a Riley.

NSW.
NSW saw 1,412 registrations or 37% of all Australian Rileys registered from the beginning of 1949 to the end of 1959.
This included two 1959 models, probably Four/68’s, and one of the Pathfinder 2.6 litres, the last of the line with the BMC six cylinder motor shared with the Wolseley.
Records are not detailed, however 16 Roadsters and Dropheads were registered in 1950 along with 292 RM sedans.
VICTORIA.
Thirty-four percent of all Rileys, or 1,286 were first registered in Victoria in this period. This included 9 Roadsters or Dropheads in 1950.
QUEENSLAND.
Almost fourteen percent of all new Rileys were registered in Queensland in this era.
The 517 cars included 9 Roadsters or Dropheads in 1950 out of 134 cars (the only year this data split was available)
SOUTH AUSTRALIA.
Four hundred and twenty two Rileys or eleven percent were registered in South Australia. This includes another of the Pathfinder 2.6 models.
WESTERN AUSTRALIA.
Only 127 (less than four percent) of Rileys were landed in Western Australia in this period.
TASMANIA.
Forty seven Rileys were first registered here between 1949 and 1956. This was just one percent of all Rileys. 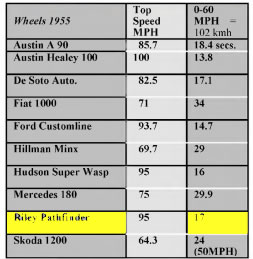 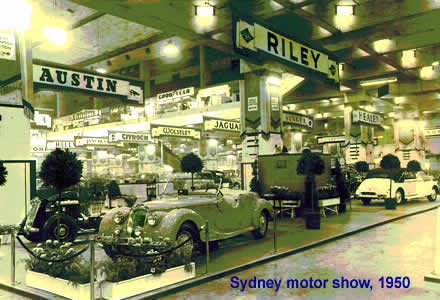 Before the Second World War Australians bought cars from around the world, and tried to match the oddities of British taxation formulae, European climatic differences or American petrol prices to local needs.
The variation in Australian road standards was enormous; vast distances were spanned by little more than tracks. climatic changes could vary these from deep red dust or gravel to unpassable mud. The the distances meant that help was rarely available when needed, especially for repairs beyond the capabilities of the local smithy or a bush mechanic.
Earlier Rileys in their many sporting and saloon manifestations from the 1920’s and 30’s are in demand in Australia. Apart from a long history of sporting successes, these cars with their innovative and efficient mechanical design were destined to provide reliable and enjoyable transport for many Australians and for many decades.

THE LAST ERA: AFTER THE SECOND WORLD WAR.
After the War cars of any description were valued in Australia. Most prized were the big unstressed simple vehicles from America; a 1939 Chevrolet, for example, was worth more than it cost new. Any new cars were eagerly sought as the world attempted to rebuild its car factories after years of neglect and damage, and raw materials such as steel and chromium were scarce.
the Australian car industry was in its infancy. Australia was a major export market after Europe, so the car-starved and growing population took a large part of the production of the new 1 1/2 litre and 2 1/2 litre models. However, two factors limited their numbers; Rileys were never mass production models and their cost inhibited sales to a country which had discovered the relative value of cheaper cars such as the Holden.

THE POST-WAR 1 1/2 LITRE.
This was the final development of the pre-war 12hp engine, clothed in a sleek new body. The car handled impeccably with its new independent front suspension, good brakes and sophisticated suspension. A maximum of 80mph came from 54 BHP.
Only 13,950 of these new cars were made between 1945 ( the RMA) and 1955 (RME) and of these 8,661 were exported. As only a quarter of the total production were thought to have been exported in Right Hand Drive form, the 1,100 registered in Australia in the early 1950’s demonstrates their relative popularity here.

THE PATHFINDER.
This was an attempt by BMC to utilise their new family saloon body (shared with Wolseley, for example) but did include the 2 1/2 litre engine in an updated form. A production run of 5,152 cars in total (1953 to 1957) did not see this badge engineered version fully developed and they were never embraced as “real Rileys” however the remaining examples in Australia are remarkably pleasant vehicles. Only 1,016 were exported in Right Hand Drive format; and around 300 were thought to have come to Australia. From 1956 even the famous Riley four cylinder engine had gone, replaced with a 2.6 litre BMC “six” with less power.

BADGE ENGINEERING.
Other Rileys were sold after the Pathfinder. These were simply clones of current BMC models with a Riley grill and higher level of specification. The Riley One-point-Five was released in 1957, followed by the Four-sixty-eight (the 68 being bhp in a largish Farina body) and a later version in 1962, the Four Seventy-Two. Even the Mini had a Riley version from that era, horribly called the Elf, and the Morris 1100 version became the Kestrel.

DON'T MISS OUT ON THE RILEY GAZETTE

Stay up to date with news from the club!

The Riley Motor Club of Australia was started in 1955, and well over 60 years later is still motoring along. Anyone with an interest in Rileys can join the Club.

The Club is not responsible for misleading or inaccurate information contained on this website. Times change, the webmaster is forgetful...

questions? Send an email to editor.rmca@gmail.com
Contact us for the next meeting
Paul Baee 0409131808

You could email and ask for a copy of the Riley Gazette
Want to know more about joining? This will take you to a form.